Generic Diphenhydramine is a very popular antihistamine. In fact, it is the active ingredient in Benadryl.

Are you wondering if Diphenhydramine can be given to dogs?

The answer is yes. The drug can be administered for various uses including: 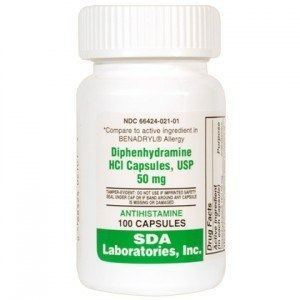 It can even help your dog deal with bee stings.

Of course, Diphenhydramine can also cause side effects. Thankfully you can reduce risks with proper dosing and by learning as much as possible. Keep reading!

This antihistamine is usually an effective treatment option, but it is necessary to get your veterinarian’s guidance.

While uncommon, Diphenhydramine has killed some dogs. Any amount exceeding 10mg per pound would be quite dangerous.

So make no mistake about it:

The drug is powerful despite its over-the-counter status.

FYI: Diphenhydramine HCL is not only in Benadryl, but also nearly every version of Unisom as well as various OTC combination drugs.

Dosing for your dog should take into account, among other factors, the treatment objective.

Is the Diphenhydramine being used for allergy relief?

Such a dose may differ from amounts for successfully sedating a pet dog to control motion sickness or agitation.

And treatment should be given with food which is why it’s a good idea to crush and mix Diphenhydramine in with meals.

Again, this medication is associated with numerous side effects.

Most dogs do not experience bad symptoms, but some are sensitive to Diphenhydramine.

Other, less frequent side effects include:

A massive overdose could cause the following:

Even death is possible as evidenced by this documented case of a Poodle-Cross dog.

Be sure to discontinue Diphenhydramine if your dog has any problems. Watch closely for an improving or worsening condition.

Head to your vet ASAP if the situation seems at all serious!

Dogs prone to seizures or heart problems should never be given Diphenhydramine or any product that contains it.

Animals with glaucoma, urinary obstructions or high blood pressure are not good candidates. This goes for pregnant or nursing dogs too.

Diphenhydramine may also be too risky for dogs already on other medications — some drug interactions can be quite dangerous!

Play it safe. Have your vet help you make an informed decision as to whether your pet will benefit from taking Diphenhydramine.

Diphenhydramine can generally be provided to dogs.

This antihistamine works well for skin allergies and several other intended purposes.

Be sure to administer an appropriate Diphenhydramine dose. Otherwise, you’d be putting your pet in harm’s way.

The best course of action:

Get your vet to prescribe Benadryl, or similar equivalent, for your dog’s particular situation.

3 thoughts on “Read This Before Giving Your Dog Diphenhydramine!”

Doctor Stephanie Flansburg Cruz, a veterinary physician, has reviewed and endorsed this article. She has 3 dogs of her own and cares about the welfare of all animals.

Please visit the About Us page for more information about Stephanie and this website.